Top Posts
Advantages of Hiring a Caterer for Your Next...
The Complete Guide to Conduct A Virtual Event
Signs of Failed Dental Bone Graft
Why Surround Yourself with Positive People
6 Winning Ecommerce Marketing Strategies in 2022
9 Reasons to Pull Out A New Line...
How Machine Learning is Improving Data Annotation
Will Computer Science be in Demand in 2030
10+ Creative WordPress Portfolio Themes For Designers
Five Benefits of Organic Hair Color
Home » Tragedies in the Music Industry Due to Addiction
Lifestyle

Tragedies in the Music Industry Due to Addiction

written by Melanie Peterson August 30, 2018 8 views
The music industry is no stranger to addiction; many artists are in a position where drugs are commonplace, and there’s plenty of money to spend on them. This is also a high-pressure profession that requires people to perform at near-superhuman capacities and to get and keep the adoration of thousands (sometimes millions) of fans. 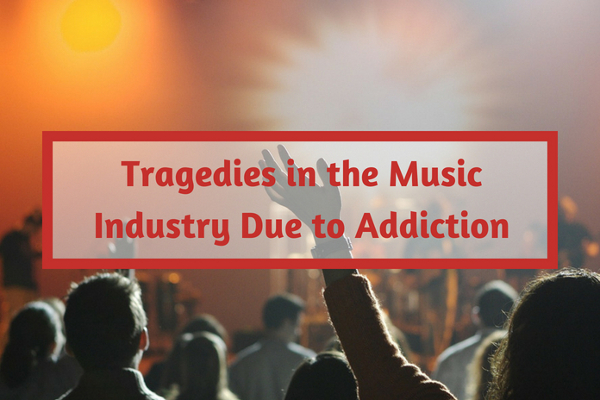 This level of expectation creates the perfect storm for stress and anxiety, and many musicians use drugs as a way to cope. It’s sad but true and has led to the loss of some of the most promising names in the music industry. These are only a tiny fraction of those who we lost too soon, and who could’ve given more to the world if not for addiction.

Janis Joplin was a musical powerhouse who created music that’s still recognizable today. She was probably one of the most poignant figures in the psychedelic era, and, unfortunately, gave in to her addictive personality.

Joplin was a habitual drug user throughout her career and often mixed illicit substances with alcohol. She preferred methamphetamines early in her career but made the switch to heroin as she became embroiled in the Hollywood drug culture. While she had instances of sobriety, she always went back to drugs and alcohol.

On October 4, 1970, her manager discovered her body in her apartment when Joplin failed to show up for a scheduled recording session. Her cause of death was ultimately determined to be a potent dose of heroin combined with alcohol. It’s rumored that the heroin she used was stronger than normal and that it may have been cut with pharmaceuticals. Regardless, no one can deny the fact that the world lost a great talent that day.

Kurt Cobain’s story is a perfect example of how the use of drugs and alcohol can exacerbate mental illness. While drugs weren’t directly responsible for his death, they did contribute to the psychological state that led him to kill himself.
On April 8, 1994, Cobain’s body was discovered after he’d been missing for six days. He was still laying with the 20-gauge shotgun that he had used to end his life roughly two and a half days earlier. His body was found by an electrician in spite of the efforts of a private investigator who had been trying to find Cobain since he’d stopped contacting his friends and family.
Autopsy reports showed that he had high concentrations of both heroin and Valium in his system at the time of death, which undoubtedly clouded his mindset. Cobain had been battling depression, bipolar disorder, and severe anxiety for years—made worse by his chronic abuse of prescription meds and illicit drugs.
He was the cornerstone of the Grunge/Rock movement and will be forever remembered as more than just a singer/songwriter. It’s commonly believed that many of his songs were about his drug use and his battle with addiction.

No one in the music industry will ever have the same power and vocal quality that Whitney Houston brought to the stage. The singer was one of the most prolific of the 20th century, and her career spanned for decades. Houston died on February 11, 2012, in her own bathtub—creating a sensationally sad story.

The autopsy revealed that the 48-year-old had died of a combination of cocaine, heart disease, and ultimately drowning. Doctors speculate that her use of the powerful stimulant had aggravated her heart disease, leading to unconsciousness and her eventual drowning in her bathwater.

Named the most recognized female performer of all time, Houston’s loss shook the industry and brought new attention to the problem of addiction. She had been an admitted cocaine addict at various points throughout her life and had failed to recover after years of personal and professional attempts.

John Belushi was one of the Blue’s Brothers and considered one of the best performers and comedians of his day. He also had a long relationship with hard drugs, particularly heroin and cocaine. Belushi was notorious for trying to fight, even switching to what he considered “softer drugs” in an effort to quit the ones that scared him.

Unfortunately, he wasn’t successful and succumbed to his addiction on March 5, 1982. His official cause of death was what’s referred to as a “speedball,” a mixture of heroin and cocaine delivered at the same time. He understood that drugs were killing him, but never got the adequate help he needed to stay sober once and for all.

Belushi’s friends and family members have described his struggle in detail, blaming much of his prescription drug abuse on the doctors that continued to prescribe them. This was a definite loss to both the music and entertainment industries.

Michael Jackson was the “King of Pop” and a cultural icon whose career spanned decades. Jackson was also at the center of a controversial trial in which he was accused of pedophilia. His bizarre behavior may have been influenced by a long-standing addiction to tranquilizers and sleeping aids, the majority of which were prescribed by a doctor.

Jackson was pronounced dead on June 25, 2009, in his home amidst oxygen tanks, pill bottles, and IV stands. He was under the supervision of a doctor when he died of a lethal combination of sedatives and propofol—a drug that’s administered to put surgery patients to sleep.

This raised serious questions and resulted in the prosecution of the doctor responsible for allowing Jackson to take these drugs. The entire situation was surreal and shed some light on the over-prescribing of certain medications in Hollywood.

Is There Hope for Change?

Many artists use their experiences with drug addiction into their music, and although those songs about addiction are beloved, it doesn’t stop the tragedy of what created them in the first place. As we discover new ways to treat and identify addiction, we’re finding more information about the way that the addicted brain works. This is working to give us hope that we can change the way that we approach treatment and help those who so desperately need it.

Express your Love and Care with these Thoughtful Gifts

Why Surround Yourself with Positive People

How You Can Celebrate the Birthday of a...

How to Make Your Rest Days More Productive...

Fun Activities That All Car Enthusiasts Should Do

Ways to Make Yourself Happier

Top 10 Tips for a Healthy Lifestyle

Top 10 Tips for a Healthy Lifestyle