Top Posts
5 Simple Upgrades That Can Be Made in...
The Advantages of Social Networking Sites for Students
How to Be a Good Blogger on Instagram
Fast & Easy Ways to Stop Your Roof...
Things You Should Know Before Getting A Pool
CTProz Review – A Secure Trading Environment for...
Medic Tours Review – Adding Luxury to Medical...
Crypto Wallet Review – An Online Trading Service...
Crypto1capital Review – Why Traders Feel Mentally Relieved...
5 Ways To Get Started With T-Shirt Photo...
Home » A Detailed Guide on Flutter Web App
Technology

The popularity of Flutter has skyrocketed for many good reasons. Initially, Flutter was only used for developing mobile applications for Android and iOS platforms but now it can also be used to create web applications. This is a new and innovative thing that developers are trying to make with Flutter app development services.

Also, big tech giants are choosing Flutter for web development because of its attractive features and characteristics. Now, Are you thinking to create a web app using Flutter?

In this blog, we will explain Flutter for the web and how you can make a successful Flutter web application.

So, let’s get started to know more!

1. As per Statista, Flutter is the most popular framework that is used for cross-platform app development according to the 2021 developer survey. 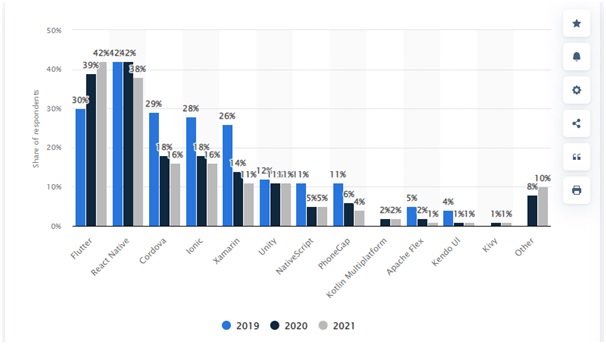 2. According to the stack overflow survey, Flutter is used by 68% of developers

Flutter is an open-source software development kit that is used to build natively compiled software applications for Android, iOS, Linux, Windows, macOS, and the web from a single codebase. That means by using one programming language and one codebase two different applications can be created.

A programming language called Dart is used in the development of Flutter web applications. Previous experience in Dart and other programming languages is not required to build a Flutter web application. You can go through the official documentation that is available on their official website to know more about the basics of Flutter web. Flutter for the web renders website apps similarly in the way it works for mobile applications for both Android and iOS platforms.

Advantages Of Using Flutter For the Web

It will be worth using Flutter for the web as it provides a lot of advantages. So, now let’s have a look at some of them!

● For web and app development simultaneously

In case you want mobile and app development altogether, then Flutter is undoubtedly the right solution for you. Additionally, it is time-saving and cost-effective at the same time because the web and mobile apps share the same standard logic, UI elements, styles, and more.

Responsive user interfaces need to be created as web and mobile apps have different looks and these will work on different screen sizes and resolutions.

If your business has already a mobile application and now you want a web application as well then Flutter for web development can be a perfect choice. As it allows the reuse of code that means you can easily reuse the existing UI elements.

How To Create And Run a Flutter Web Application

You need Flutter 1.5 and above to make a web application using Flutter as It comes with the support of Dart compilation to JavaScript. By running the flutter upgrade on your machine you can make sure that you have achieved the Flutter v.1.5.4.

Webdev package provides the tools for Flutter web. So to install that run the following command.

You should ensure that the $HOME/. pub-cache/bin directory is in your path and after that, you can use the webdev command directly from the terminal.

Next, to add $HOME/. pub-cache/bin directory to your path, call the path file by running the below command.

Now the file will be opened with text edit and you should make a reference to all your components and save it.

Now, without any further wait let’s move on to the further step.

After the installation process, you need an IDE (Integrated Development Environment) to start the development of your web application. Here we are going to explain 3 IDEs step by step that you can use according to the instructions.

In Android Studio you need to use the Stagehand package as it has no direct plugin or template to create a web project. Basically, Stagehand is a Dart project scaffolding generator that is inspired by the tools like Web Starter Kit and Yeoman.

After the project is created, open the Android Studio and add the below dependencies in your pubspec.yaml file. 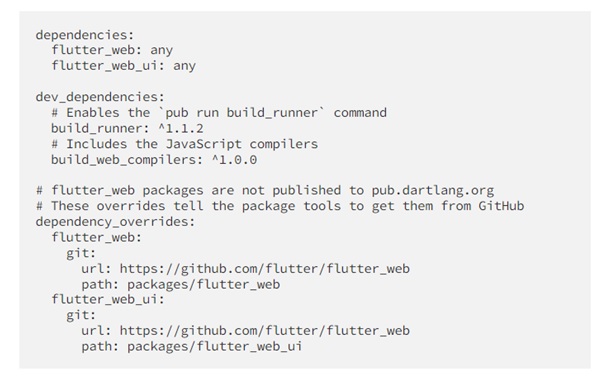 ● To download all the necessary files, run pub get from the terminal.

● After that, create a lib folder in the root directory.

● After creating the lib folder, create a main. dart file in it and paste the below code into it.

● After that open the main. dart file and paste the below code in it.

● After a long process, now you are ready to test your web project. Run the app by typing the below command in the terminal.

Open the local host in chrome and you can see the Hello World in red text.

The popularity of Flutter is increasing day by day and it has proved to bring more value to your business. It is an ideal platform for building web applications like PWAs (Progressive web apps) or SPAs and also helps to bring existing mobile apps to the web.

After reading the whole blog, you might be thinking of creating a web application. So you can collaborate with us to have the best web application for your brand.

1. Is Flutter suitable for web development?

Yes, along with app development Flutter is appropriate for web development as well. By using it existing code can easily be embodied into the web browser to create a new application.

2. What exactly is Flutter for the web?

Flutter for the web will help you to develop web applications using Flutter. Additionally, it allows sharing of code between different platforms.

3. Which programming language is used in Flutter?

This popular framework uses Dart as its primary programming language to build natively compiled applications for web, mobile, and desktop.

White-Label NFT Platform: The End of an Ever-Expanding Model

Things to Consider While Buying Godrej Refrigerator for a Large Family

What is the Best Way to Get...

20 Things the Internet & Technology Has...