Top Posts
A Detailed Guide on Flutter Web App
White-Label NFT Platform: The End of an Ever-Expanding...
Best VPNs for Travel in 2023
6 Gaming Setup Ideas for Inspiration
12 Easy Tips to Improve Your Natural Beauty
The Best Packing and Moving Services to Relocate...
The Benefits of Flowers in Making Us Happy
Patient Lifetime Value — An Investment Worth Considering
5 Great Business Ideas That Still Make Money...
5 Ways in Which You Can Rely on...
Home » Escape Room Technology: A Look Inside the Escape Room Game
Entertainment

When we think of thrilling mystery solving, the first thing that pops up in our heads is possibly escape room games. It is a perfect blend of mystery and puzzle-solving. As it requires team cooperation, escape rooms also promote friendship and team spirit. Nowadays, escape rooms are not only played at a venue but also virtually. Seeing the renewed interest in escape rooms, we will attempt to look inside the escape rooms and understand how they work. 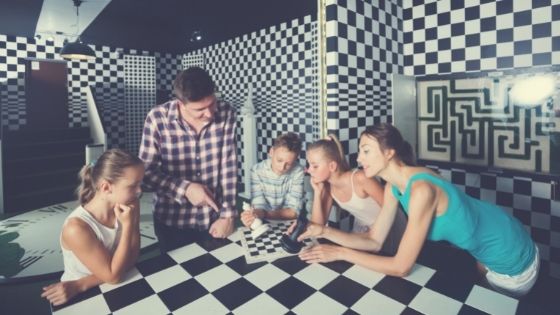 What are escape rooms?

Escape rooms (also known as puzzle rooms or exit rooms) are essentially games in which a team of players is left with clues and unsolved puzzles. They must accomplish the given task by solving the puzzle and deciphering the clues. The main goal is to make it out of the escape room under the time limit. Most of the games are usually collaborative, but often they are competitive as well.

The scenarios given are fictitious, and the players must use their knowledge and skills to participate in the game. Although these games (mostly on-site) are a nod to “locked room mysteries,” you are not actually going to be locked in a room. Rather, escaping the room means outrunning the main villain from the given scenario. The main villain is usually the game host of the escape room. Sometimes the games are conceptualized around pop culture references or fandoms such as Harry Potter, Dr. Strange, Batman, etc.

These days, escape rooms like escape room breakout are not only physical venues but they are also providing virtual experience. The escape room technology itself includes both physical clues and technological innovations.

How do escape rooms work?

The escape rooms will always have a game master or a host who navigates the game. He is the one in charge of setting everything up. He would be the one explaining the rules and supplying the hints as needed. There is a fixed time limit before which you must escape the room.

Most common locations for the games are usually basements, castles, pyramids, gothic palaces, space stations, abandoned cities, etc. The escape rooms used to be only physical locations, but with the advancement of escape room technologies, there are now virtual game rooms as well. These game rooms usually have a server in place of an actual game host.

But many of these escape rooms use live hosts as well. The goal is to escape the room, but most games also have additional tasks like finding some lost treasure, hidden formulas, rescuing hostages, and stopping a fictional threat to the community.

Be it physical or virtual; escape rooms use a lot of technological tactics to improve the experience. The inclusion of technology is certainly not something new in the escape room business, but the innovative manner in which they are included makes the game all the more fun.

Inclusion of technology in Escape rooms?

Since escape rooms are all about understanding your environment, the clues can be either physical, auditory, or visual. You must interact with the surroundings to figure out where the clues could be. The wisest way to find the clues fast would be to pay attention to the electronic as well as mechanical clues.

Electronic clues may include cameras, light switches, audio or visual recordings, electronic locks, and automated doors, to name a few. The usage of cameras is very common in escape rooms. Surveillance footage and old recordings play a huge role in escape rooms. The surveillance cameras are used to track the actions of the players as well. The cameras are also used to communicate with the game master. In case there is any need for hints or even an emergency, the cameras come in handy. The use of lights and sound effects go hand in hand. Often mysterious audio recordings are ushered by the flickering of light.

So, definitely observe the switches carefully. As the main goal is to escape the room, the key to the room is obviously going to be hard to find. Instead of actual keys, electronic locks double the thrill. The locks only open after the puzzle has been solved, so technology plays a huge role here. Some escape rooms even have 3D controllers to steer the game. When it comes to virtual games, the technology gets even more intense.

The mechanical clues obviously include the mechanism of the locks and door. But there is more focus on the physical aspects of the objects. The clues could be hidden on the hinges of the doors or above the furniture. Definitely look for clues near windows or any conveniently placed object. Often the keys are used in a special way that would be revealed only after some clues have been found. So, it is very important that you look anywhere and everywhere.

Escape room technology has evolved and advanced in a superior manner. With the new wave in escape rooms, there are even VR games designed to provide that same feeling. The games are primarily meant to be thrilling and bring out the best in the team. So, the technology used, both physical and otherwise, aims to bring out the most thrilling experience you can find in an escape room.

3 Items to Invest In

The Features of a Good Modern Backpack

Why is the Popularity of Online Movie Sites...

Is AniMixPlay Legal and Safe to Watch Anime?

3 Types of Oldies Entertainment to Hire

How Could I Compose Heart Touching Lyrics for...

How Could I Compose Heart Touching Lyrics...

Why is the Popularity of Online Movie...

Is AniMixPlay Legal and Safe to Watch...