Top Posts
How to Heal from an Unhealthy Relationship
7 Thoughtful Christmas Gift Ideas For Newlyweds On...
Can You Drink Alcohol After Wisdom Teeth Removal
5 Simple Upgrades That Can Be Made in...
The Advantages of Social Networking Sites for Students
How to Be a Good Blogger on Instagram
Fast & Easy Ways to Stop Your Roof...
Things You Should Know Before Getting A Pool
CTProz Review – A Secure Trading Environment for...
Medic Tours Review – Adding Luxury to Medical...
Home » 10 Celebrity Health Secrets for a Slender, Super-Fit, and Sexy Body
Health Tips

10 Celebrity Health Secrets for a Slender, Super-Fit, and Sexy Body

written by Melanie Peterson May 30, 2019 52 views
Celebrities have become the most sought-after influencers fuelling digital advertisements. Cult celebrities propagate luxury brands eyeing an audience that venerates their lifestyles in the social media world. Popular icons encourage their loyal and highly engaged fans to chart a health-conscious path by mapping out templates of how to attain success. 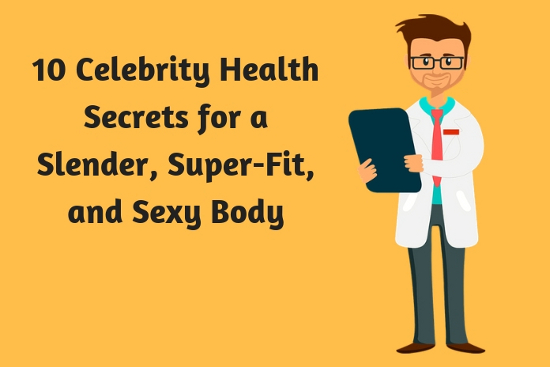 We have compiled the easiest health tips that actually work from our top tier influencers to keep you in rude health.

Susan Boyle, a Scottish opera star went off the radar but keeps exploding into the limelight now and then. She tested positive for type 2 diabetes but took health seriously to lose weight by eliminating sugar and chocolate from her diet.

She lost weight significantly-and now she looks skinny and gorgeous. Needless to say, Boyle looks slenderer and lively than ever.

Melissa McCarthy took Hollywood by the storm appearing in her new avatar. She slimmed down losing a whopping 75 pounds making her the hottest comedian alive. Melissa sweats it out five days per week with cardio and weight training. She eliminated junk food in favor of organic food, lean protein and traces of complex carbohydrates.

One of her simple weight loss-inducing techniques is sleeping. The actress has an early bedtime routine makes her heart healthier, reduces inflammation and chases off chronic diseases. As weird as it looks, her tip works.

Fans follow Jennifer Hudson’s career along with her incredible weight loss journey. She lost 80lbs pushing her weight-loss regime to the extremes. Jennifer admits she doesn’t hit the gym to maintain her trim physique but reaps the benefits of mindful eating.

She jots down everything she devours during the day. And no pasta, fried food, pizza and red meat. You’ve to be a strict dietician to replicate her figure.

We’ve watched Jordin Sparks soar to stardom since 2007 in the music industry. She lost 50lbs shrinking from size 14 to 2 in one year and a half to boost her immune system after a mild illness. Surprisingly, her snail-paced walks in her suburbs allowed her to get off to a flying start in her regimen.

That’s the greatest misconception in weight loss-don’t race and drench your clothes in sweat with the hope of slimming down instantly, your body will take its toll and reverse the benefits. And, discerning and debunking myths is the key to winning the battle of the bulge.

In the aftermath of Christina Aguilera’s split with her husband in 2010, her life became a train wreck piling on the pounds in just a few months.

Christina says her secret weapon to weight loss is to eat like a bird-in small portions frequently. In 2013, she lost 40lbs with yoga and a low-calorie meal diet. That’s how she keeps her belly full and tails off weight naturally.

Jonah Hill’s body image transformation following a dramatic weight loss journey brought the world to a standstill. After piling it on for War Dogs, Jonah decided to go for an athletic build and accumulate muscle.

He ruled out pills or other products opting to seek the advice of a nutritionist for a balanced diet and lifestyle habits. He hit the ground running and his agility now is very telling.

For Zach Galifianakis, cutting out the alcohol boosted his weight loss stealing the limelight on Emmys red carpet with a trimmed figure. Zach points out alcohol plays a pivotal role in the body’s biochemical functions and overall health.

8. Variety is the Spice of Fitness

Kim Kardashian added 50lbs during her second pregnancy and took six months to shed it. A personal trainer provided a safe pair of hands.

Her diversified workout routine mixed low-intensity interval exercises with high-intensity bursts. At the end of each exercise, Kardashian also pumped iron. Taking on new workouts kept her body guessing and helped her maintain a revved-up metabolism.

Actor Chris Pratt’s drastic ripped body transformation allowed him to portray Star-Lord in Guardian of the Galaxy. He had to melt away 60lbs in 6 months sparking commotion. He revealed his key to success as consistency. A consistent regimen aligns your body and mind to your goals.

Pratt urges fans to try practical approaches and give the process adequate time.

While Zac Efron had glorious ab-goals, he had to step up his regimen for his Baywatch role. He got shredded and jacked with lean muscles. Efron says he combined diet and exercise to sculpt his Baywatch body.

He also eliminated refined carbs, sugar and highly processed foods from his diet.

Crucial Things You should Know about Brow Lift Procedure

Can You Drink Alcohol After Wisdom Teeth Removal

Is an Abscessed Tooth Dangerous? Here’s Everything...